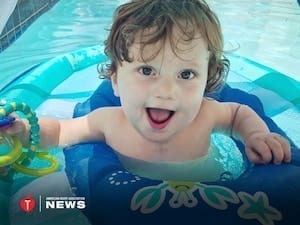 TUESDAY, Aug. 7, 2018 (American Heart Association) — Despite a nerve-racking pregnancy and delivery, Bevin and Scott Reinen described the moment that they finally got to meet their baby boy as “euphoric.”

Four days after his birth, the couple sat beside their son following an open-heart surgery to treat a rare congenital heart defect. Baby Kemp was covered by wires connected to monitors and machines keeping him alive. Adding to the parents’ anguish, the doctors had to leave the chest incision open until the swelling subsided.

“We could literally see his little heart beating inside of his chest,” Bevin said. “I tried to numb myself to the sight of it, but just couldn’t wait for him to be stitched back up.”

Their journey had begun with Bevin’s 12-week ultrasound, when the technician and doctor could not confirm that he had four chambers in his heart.

Two days later, after a fetal echocardiogram, they received the news that their unborn son had hypoplastic left heart syndrome, or HLHS. Without immediate intervention, the congenital heart defect is fatal, usually within the first few days or weeks of life.

“It was a lot to take in and tough to process,” Scott said.

With HLHS, the left side of the heart doesn’t develop properly while a child is in the womb, making it impossible for the left ventricle — responsible for pumping freshly oxygenated blood out to the rest of the body — to function properly.

“Receiving the news was gut-wrenching,” Bevin said. “We were informed about all the potential risks and given difficult options to consider.”

The Reinens were supposed to host a Super Bowl party that Sunday, which also was when they were going to share with friends that Bevin was pregnant. They canceled the party to allow themselves time to sort through the news.

“We took the weekend and did a lot of soul searching and were just really vulnerable and communicative with each other,” Bevin said.

By Monday, they picked themselves back up and got to work.

“We were on a mission to do everything in our power to set him up for success,” she said.

That morning, Scott was on the phone with top doctors and hospitals in the field. He also reached out to families affected by congenital heart defects. He and Bevin chose Boston Children’s Hospital because of its expertise in treating HLHS.

After Kemp was born on Aug. 4, 2017, at Brigham and Women’s Hospital, he was taken in a carriage across a footbridge to Boston Children’s Hospital, with Scott accompanying his newborn son.

“It was a very intense experience,” he said. “We felt so much anxiety but also excitement because we just had a baby.”

The first surgery, called the Norwood procedure, allows the right ventricle to pump blood to both the lungs and the body. Blood is directed to the lungs through a shunt.

Children born with HLHS undergo a set of three surgical procedures in the first few days, months and years after birth to help stabilize the heart and reconstruct it so that it can pump blood with only one ventricle.

Once Kemp recovered from his first surgery, he went home to Virginia Beach, Virginia. The time until the next surgery is known as the “interstage period.” During that phase, the Reinens endured a daily regimen that included giving Kemp multiple medications three times a day, administering daily weight and pulse checks, recording details about every feeding, as well as frequent appointments with his cardiologists and other specialists. Only immediate adult family members were allowed to interact with Kemp for fear he would contract an illness.

The second surgery, which included a Christmas stay in the hospital and a few anxiety-provoking bumps, ultimately proved as successful as the first. Called the Glenn procedure, it involved connecting the superior vena cava — a large vein that carries deoxygenated blood into the heart — to the right pulmonary artery.

The benefit was stunning.

“Kemp looked healthier and seemed to be much stronger,” Bevin said. “His skin was pink and vibrant.”

In January, their extended families gathered for belated holiday celebrations, where relatives got to interact with Kemp much more personally.

They also marveled over his name.

Kemp was named after Scott’s late great-uncle. However, only after they received his diagnosis did they discover that Kemp means “warrior.”

“After we looked up the meaning, we knew it was the perfect name for him,” Bevin said.

Even after successful treatment, children are advised to limit physical activities to their own endurance levels and will require lifelong medication, repeated cardiologist checks and other potential cardiac interventions.

Kemp turned 1 on Aug. 4. He’s thriving and acting every bit the typical toddler. He loves the beach, playing with other children and teasing the family dog, Matty.

“You’d never know he’s had two heart surgeries or a heart problem,” Scott said. “He’s super energetic, running around like a crazy man. It’s pretty remarkable, but his heart health will always be on our minds.”

Because they understand how difficult the journey is, the Reinens have reached out to help other families impacted by CHDs and to spread awareness.

Bevin helped support families impacted by CHD through Mended Little Hearts of Coastal Virginia, organizing a drive to provide a “Bravery Bag” filled with items to make the stay at Children’s Hospital of the King’s Daughters in Norfolk, Virginia, more comfortable for heart patients and their families. Bevin and Scott also shared their story at the Hampton Roads American Heart Association Heart Ball.

Kemp’s final surgery of the three-stage repair is expected to come within two years.

“In the meantime, we are just enjoying everyday life with our little guy and making time for lots of fun adventures” said Bevin, who brought to this ordeal an expertise honed from years as a children’s educator.

“He came into this world as ‘Kemp the Warrior,’ but now he’s just our son,” she said. “There are countless things that make him special that have nothing to do with his heart.”