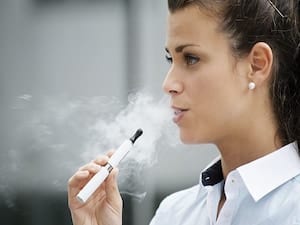 TUESDAY, Nov. 20, 2018 (HealthDay News) — The advent of the e-cigarette appears to have spurred a huge drop in tobacco smoking rates among teenagers and young adults, a new study claims.

Previous research has argued that vaping could prove to be a gateway drug for smoking, by getting youngsters hooked on nicotine and used to the physical actions associated with smoking.

Instead, smoking among teens dropped off dramatically after e-cigarette use became more widespread in 2013, said lead researcher David Levy. He is a professor with the Georgetown University Lombardi Comprehensive Cancer Center, in Washington, D.C.

“The rate of decline in cigarette use tripled,” said Levy.

The new findings come days after U.S. regulators pledged to strengthen policies that prevent the sale of flavored vaping products to minors.

“I will not allow a generation of children to become addicted to nicotine through e-cigarettes,” FDA Commissioner Dr. Scott Gottlieb said in a U.S. Food and Drug Administration statement. “We won’t let this pool of kids, a pool of future potential smokers, of future disease and death, to continue to build.”

For the new study, Levy and his colleagues analyzed responses to five different national surveys that track tobacco use.

The surveys showed that, prior to 2013, cigarette smoking was gradually declining among young people between the ages of 15 and 25, the researchers reported.

But after 2013, that gradual decline turned into a steep decline. The annual relative reduction in smoking tripled among 10th and 12th graders, the investigators found.

Why? Levy and his colleagues suggested that, in part, it’s because vaping became popular.

“When e-cigarette use came in, smoking rates dropped between 25 and 40 percent,” Levy said. “Smoking rates in young adults have dropped by almost 50 percent, and most of that [has been] since 2013.”

“My concern is if we have very strict policies on e-cigarettes, it’s kind of like throwing out the baby with the bathwater,” Levy said. “We might see more smoking.”

But Patricia Folan, director of the Northwell Health Center for Tobacco Control in Great Neck, N.Y., said the new report gives vaping too much credit for the decline in tobacco use among young people.

“Anti-tobacco media campaigns, increasing taxes on cigarettes, tobacco-free environments, the removal of cigarettes and other tobacco products from some pharmacies and other retail stores, as well as efforts to restrict and reduce point-of-sale advertising have all contributed to a reduction of smoking among teens and adults,” Folan said.

Levy agreed that these measures have played a part, but argued that “of the between 25 and 50 percent drop in smoking rates, maybe 10 percent might be explained by other policies.”

In fact, the availability of e-cigarettes might make other anti-smoking efforts more effective, Levy added.

“Those other policies probably have become a lot more powerful as a result of e-cigarettes being there as a substitute for cigarettes,” he said.

But Folan noted that even if young people are vaping rather than smoking, they’re still being exposed to nicotine.

“Vaping is often perceived as a healthy alternative for teens and adults,” she said. “However, for teens the exposure to nicotine can have an adverse effect on the developing brain and lead to lifelong addiction.”

It also shouldn’t be assumed that e-cigarettes are harmless, said Dr. Len Horovitz, a pulmonary specialist with Lenox Hill Hospital in New York City. The vapor inhaled by users contains a wide array of chemicals.

“This is not a non-toxic thing to do, just because it’s not burning paper and burning tobacco,” Horovitz said. “There’s nothing OK about vaping.”

The study was published online Nov. 20 in the journal Tobacco Control.

The U.S. Food and Drug Administration has more about upcoming e-cigarette regulations.