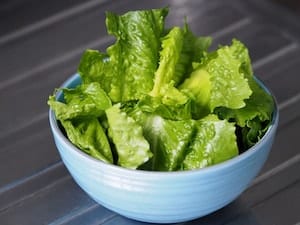 So far, 59 people across 15 states have come down with the often severe gastrointestinal illness. Health concerns were so high that just before Thanksgiving, the U.S. Food and Drug Administration and the U.S. Centers for Disease Control and Prevention asked Americans to temporarily stop consuming all romaine lettuce while they investigated the source of the outbreak.

That investigation has now uncovered at least one source, experts at the FDA and CDC said in a news briefing Thursday afternoon.

“One of the samples tested by the CDC was positive for the outbreak strain by genetic fingerprinting, and was found in the sediment of an agricultural water reservoir at one ranch that is owned and operated by Adam Brothers Farming in Santa Barbara County, Calif.,” said Dr. Stephen Ostroff, senior advisor to the FDA Commissioner.

He said the farm was cooperating with the investigation. The farm hasn’t shipped romaine lettuce since Nov. 20, and Ostroff said the farm is “committed to recalling products that may have come into contact with water from the agricultural water reservoir.”

That said, other farms in the area might still be implicated, so “people should still pay close attention to where their lettuce is from,” he added.

Most romaine sold in the United States is safe to eat. Right now, precautions are limited to romaine lettuce from just a few California counties, the FDA said.

Hydroponically- and greenhouse-grown romaine also does not appear to be related to the current outbreak.

Illnesses from the E. coli O157:H7 strain implicated in this outbreak have sometimes been severe. Although no deaths have been reported, there have 23 hospitalizations and 2 cases of kidney failure, health officials said.