Do Women Really Need to Starve Themselves During Labor? 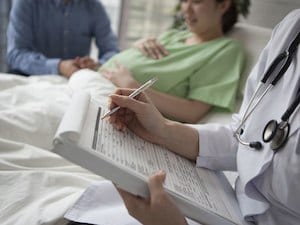 For about 1,200 women in a new study, however, access to food and drink during labor appeared to be safe.

Not only were there no additional complications in the food-and-drink patients, but researchers found that women who could only have ice chips were more likely to end up needing a cesarean-section delivery.

“We’re not exactly sure of the reason why,” said the study’s lead author, Anne Shea-Lewis, director of maternal-child health at St. Charles Hospital in Port Jefferson, N.Y.

“Was it easier to have a C-section because these women hadn’t eaten? Or was the other group more patient in labor because they were able to eat? There’s no way of proving what it was with this study,” said Shea-Lewis.

The practice of restricting food and water during labor dates back to the 1940s, due to the risk of vomiting and aspiration when general anesthesia was required for a surgical delivery. Since that time, however, significant advances in anesthesia have made the risk of aspiration lower.

Many women now receive epidural anesthesia during labor. An epidural is anesthetic introduced into a space near the spinal cord that numbs pain by causing a loss of sensation from the waist down.

Dr. Genevieve Sicuranza, chief of obstetrics at NYU Winthrop Hospital in Mineola, N.Y., said if a woman already has an epidural and needs a C-section, she can be given a stronger dose of anesthetic through the epidural catheter.

The study included nearly 2,800 women going through labor at St. Charles Hospital from 2008 through 2012. About 1,600 women were restricted to ice chips only. The others were allowed to have food and drinks as they pleased.

Twenty percent of women in the group allowed to eat and drink had been diagnosed with a pre-existing medical condition that complicated their pregnancy compared to just 14 percent in the ice chips-only group. Yet women in the ice chips group had more complications during labor and birth, including a higher rate of C-sections.

Due to the study’s design, it cannot prove a cause-and-effect relationship. And Shea-Lewis said the study is “not meant as medical advice.” She said women should start a conversation with their doctor if this is something that’s important to them.

Sicuranza said her hospital changed its policy to allow women to have clear liquids during labor.

“This has made patients more comfortable, and patient satisfaction is improved. Plus, a well-hydrated patient does better,” she said.

But the hospital doesn’t allow solid food during labor. “The esophageal sphincter (a valve that keeps food in the stomach) is weak in pregnant women, and if there’s an emergency, we want to be able to give general anesthesia safely,” she explained.

That policy matches the guidance given by the American College of Obstetricians and Gynecologists (ACOG) that recommends no solid foods during labor.

Dr. Scott Sullivan, a spokesperson for ACOG, said the organization gives guidance on best practices, but doesn’t dictate what doctors or hospitals do.

He said the decision about whether or not food and drink will be safe during labor is often individualized.

“The risk of aspiration is really low, and for that small risk, women were starved and dehydrated,” said Sullivan, director of maternal and fetal medicine at the Medical University of South Carolina.

“When at the pushing stage, it takes a lot of effort and energy. If a woman hasn’t eaten, she’s going to feel dehydrated and sapped of energy and won’t do as well. So it’s a very reasonable thing to reconsider a blanket policy,” Sullivan explained.

That said, some women have a higher risk of aspiration or of possibly needing surgery. These include women with diabetes, acid reflux or a history of abdominal surgery. For these women, he might still recommend just ice chips during labor.

The study was published in the March issue of the American Journal of Nursing.

Read more on ACOG’s official position on eating and drinking during labor.