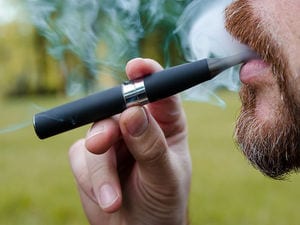 TUESDAY, Jan. 23, 2018 (HealthDay News) — Potential harms and benefits of e-cigarettes may depend on your age, according to a report mandated by the U.S. Congress.

The devices can lead young people to smoke conventional tobacco, but they also appear to help adults quit smoking, the experts concluded.

The National Academies of Sciences, Engineering and Medicine report is the first to review all current research on these popular devices, said committee chair David Eaton.

“E-cigarettes can’t be simply categorized as either beneficial or harmful,” said Eaton. “Evidence suggests that while they’re not necessarily without health risks on their own, they are likely to be far less harmful than a conventional cigarette.”

Still, little is known about the long-term health effects of e-cigarettes, added Eaton, a professor at the University of Washington School of Public Health.

Millions of Americans use e-cigarettes, according to the report. While the battery-operated products vary, all contain a heating element that produces an inhalable aerosol.

In the short term, over the next 30 years, e-cigarettes are likely to be a public health benefit, the researchers determined. That’s “because even a small smoking cessation rate among adult smokers can have a public health impact,” Eaton said.

But the effects on children who start smoking tobacco because of e-cigarettes won’t be seen for many years. Looking over the next 50 years, e-cigarettes may have a negative public health impact, he added.

Reviewing 800 studies on the human health effects of e-cigarettes, the committee also found that nicotine exposure varies by device, the liquid used to make the vapor and the particular mechanism.

Intake of nicotine — the addictive component in cigarettes — can be comparable in e-cigarettes and tobacco cigarettes, the findings showed. However, e-cigarettes contain fewer toxic chemicals, and lower levels of them, than traditional cigarettes.

Switching to e-cigarettes from regular cigarettes can reduce short-term negative health effects “in several organ systems,” the authors of the report noted.

However, there is “substantial evidence” that e-cigarette use by teens increases their risk of smoking tobacco.

“The report confirms a number of concerns that public health advocates have with regard to e-cigarettes,” said Sward, the association’s assistant vice president for national advocacy.

These findings highlight why FDA oversight of these products is important, Sward said. “This could very well be damaging, particularly in terms of impacting kids,” she said.

The FDA has postponed enacting regulations on e-cigarettes until at least 2022.

Other findings in the report, which was released Tuesday:

The National Academies’ mission is to provide independent, objective advice to the nation.

For more about e-cigarettes, visit the U.S. National Institute on Drug Abuse.