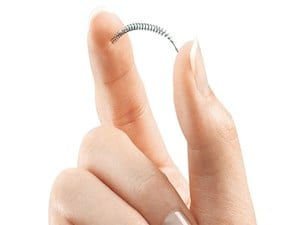 TUESDAY, Jan. 23, 2018 (HealthDay News) — Essure implants used in female sterilization have come under fire in recent years, with women reporting a wide array of problems to the U.S. Food and Drug Administration.

A new study from France shows the implants are relatively safe and do not raise the risk of side effects or health problems, however.

The results show that Essure should remain on the market as a viable option for some women who want to avoid pregnancy, said Dr. Eve Espey, chair of obstetrics and gynecology at the University of New Mexico School of Medicine.

“I do hope calmer minds will prevail and we don’t lose a very valuable technique that’s helped lots and lots of women,” said Espey, who wrote an editorial that accompanied the study. Both were published in the Jan. 23/30 issue of the Journal of the American Medical Association.

Essure implants — small springlike coils — are inserted into the fallopian tubes through the vagina, eliminating the need for any incisions. The procedure can be performed in an office setting in less than 15 minutes.

Once inserted, the coils promote the creation of scar tissue that eventually seals off the tubes. However, the natural process can take up to three months, and in the meantime a woman can still get pregnant through unprotected sex.

Essure is a valuable option for women with health problems serious enough that they might die under general anesthesia, which is required for laparoscopic surgery, said Dr. Charles Ascher-Walsh, director of gynecology and urogynecology for Mount Sinai Hospital in New York City.

It’s also a good option women with prior abdominal surgery and for women with so much excess weight that laparoscopic surgery would be difficult to perform, Espey explained.

The matter has grown so heated that Espey said she saw people protesting Essure right next to anti-abortion protesters when she attended the last annual meeting of the American College of Obstetricians and Gynecologists.

To weigh these safety concerns, researchers, led by Dr. Kim Bouillon of the French National Agency for Medicines and Health Products in Saint-Denis, analyzed data from more than 105,000 French women who received sterilization between 2010 and 2014.

About a third of the women received the Essure implant, and the rest had traditional laparoscopic surgery.

Women who got the Essure implant faced lower immediate risk for complications, about 0.13 percent compared against 0.78 percent for surgery — not surprising, given that the procedure requires no incisions or anesthesia.

However, Essure patients also faced a higher risk that the sterilization wouldn’t take effect — about 4.8 percent compared with 0.69 percent for surgery.

They also were more likely to require another gynecological procedure within a year, about 5.7 percent versus 1.7 percent.

“What they found is what we already knew, that a larger percent of women needed a second sterilization procedure because the first one didn’t work,” Espey said.

But the researchers found no difference in other medical complications and side effects between Essure and laparoscopic surgery.

Espey and Ascher-Walsh doubt that the findings will end suspicion regarding Essure’s safety.

“This will give a little bit more evidence to us when we’re trying to let a patient know it’s not as bad as it sounds, but it’s one chord in a long tune of negativity,” Ascher-Walsh said. “I honestly don’t think it’s going to change too much.”

Espey said she’s most worried that Essure’s manufacturer, Bayer, will decide it’s not worth the trouble and pull the device from the market.

“My concern is it won’t matter what women think or what the research says. If the product goes off the market, it’s gone,” Espey said. “Having a robust method mix is most likely to have the best impact to allow women to plan their families and reduce unplanned pregnancy.”

In a statement, Bayer said it supports the study’s conclusions.

“Bayer believes it is critically important that women and their health care providers are armed with factual, unbiased information regarding permanent birth control options, given there are misconceptions and blatant untruths spread when it comes to all types of birth control, but particularly hysteroscopic surgery,” the company said.

For more on female sterilization, visit the U.S. Department of Health and Human Services.