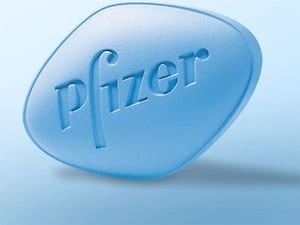 MONDAY, Dec. 11, 2017 (HealthDay News) — In news that will delight men who’ve had difficulties in the bedroom, two generic versions of the erectile dysfunction drug Viagra are scheduled to hit the market Monday.

One of the new generics is made by Teva Pharmaceuticals, and the other by Greenstone, a subsidiary of Pfizer, the company that manufactures Viagra.

Viagra came on the market in 1998 as the first drug to treat impotence. Cialis (tadalafil) and Levitra (vardenafil) are two other erectile dysfunction medications. They work by relaxing muscle cells in the penis, which allows for greater blood flow, according to the Urology Care Foundation.

Pfizer says the current wholesale cost for a 50 milligram or 100 milligram Viagra is $61.54 a pill. Greenstone will sell the generic version for between $30 and $35 a pill.

However, both of those figures represent the price the drug maker charges. A number of variables affect the final cost a consumer pays, such as mark-ups from pharmacy benefit managers or pharmacies, and insurance coverage and co-pays.

“Cost has been a tremendous issue for patients. Many patients have been unable to obtain the medication since insurance companies don’t pay for it and out-of-pocket costs are astronomical,” said Dr. Aaron Katz, chairman of urology at NYU Winthrop Hospital in Mineola, N.Y.

“The hope is that [the introduction of generics] will reduce the cost, and patients will have greater access to Viagra, which has been an important medication for healthy men with erectile dysfunction,” he added.

Dr. Warren Bromberg is chief of urology at Northern Westchester Hospital in Mount Kisco, N.Y. He agreed that cost has been an issue with these drugs.

Generic versions “will be of real benefit to the majority of men,” he said. “The brand erectile dysfunction drugs are often not covered by commercial payers [insurance companies], or are covered but with substantial co-pays and restrictions on the number of pills covered per month,” he said.

For older men on Medicare, he said the brand-name drugs can cost as much as $50 for one pill.

Both doctors said this has led many men in the United States to buy erectile dysfunction drugs online or in Canada.

Pfizer, however, is offering discount programs beginning in January to make Viagra more affordable. For men who pay cash and have a valid prescription, the company is offering home delivery (Pfizer Direct) of brand-name Viagra for about 50 percent off list price. Pfizer Direct doesn’t take insurance. The cost of a pill in this program is between $30 and $34, according to Pfizer.

Also for cash-paying customers, Pfizer is offering an enhanced savings card that lifts the six-pill minimum purchase and provides a 50 percent savings off the retail price. Pfizer cannot estimate the cost per pill because different pharmacies charge different prices.

Another program is for those with insurance. Consumers who have their Viagra prescription filled at a participating pharmacy will have a $20 out-of-pocket co-pay through the first part of 2018. The company estimates that 80 percent to 85 percent of retail pharmacies in the United States participate in this plan.

But pills aren’t the only treatment available for erectile dysfunction. Katz said the first thing a man should do is have a proper physical from a primary care physician. Impotence can be the first sign of heart disease, particularly in younger men, he said.

Bromberg said diabetes is the most common cause of erectile dysfunction in the United States, which is another good reason to ensure your overall health is good.

Like most medications, erectile dysfunction drugs can cause side effects. They can include headache, flushing of the face, nausea, lightheadedness, and a temporary bluish-tint to vision, Bromberg said. And though rare, it is possible to have an erection that lasts for four hours or more. If this occurs, a man must see a doctor right away.

Men who have had a heart attack in the past six months, those taking nitrates (nitroglycerin) for heart disease, and men taking protease inhibitors for an HIV infection shouldn’t take erectile dysfunction drugs, Bromberg said.

Learn more about erectile dysfunction and its treatment from the Urology Care Foundation from the American Urological Association.