No Safety Concerns With DTaP Combo Vaccine for Kids: Study 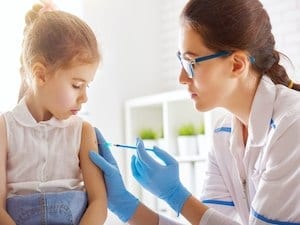 “No new or unexpected adverse events were detected” with use of the diphtheria-tetanus-acellular pertussis (DTaP) shot over 19 years of follow-up, concluded a team led by Dr. Pedro Moro, of the U.S. Centers for Disease Control and Prevention.

The shot protects against three potentially serious infectious diseases of childhood, including whooping cough (pertussis). In recent years, the “anti-vaxxer” movement — a small minority of parents — has raised concerns that routine childhood immunizations might carry long-term health risks for kids.

These concerns persist despite numerous studies showing no link between childhood vaccines and conditions such as autoimmune dysfunction or autism.

The latest study seems to add to that body of evidence. Moro’s team focused on the DTaP vaccine, which is routinely advised as a five-dose series given at ages 2 months, 4 months, 6 months, 15 to 18 months and then again between the ages of 4 and 6 years.

Millions of U.S. children have received the DTaP vaccine, and the CDC team looked through about 50,000 “adverse effect” reports tied to the shot. The investigators noted that the shot was given concurrently with other vaccines about 88 percent of the time.

The vast majority of incidents reported were swelling or redness at the injection site, which soon went away, the researchers said. These injection-site reactions were “disproportionately reported,” the team said, suggesting that doctors may need to better educate parents that these types of reactions are not unexpected.

But no serious or unexpected adverse effects were seen, Moro’s group said. Their report was published online June 4 in the journal Pediatrics.

Dr. Sunil Sood directs pediatrics at Northwell Health Southside Hospital in Bay Shore, N.Y. He wasn’t involved in the new study, but said the DTaP shot was found to be safe.

“Occurrence of serious neurologic, gastrointestinal and allergic events were consistent with background population rates for these conditions,” meaning that they were no more likely in kids who got the DTaP shot versus the general population, Sood explained.

“This report reassures us of the relatively low frequency of adverse events with current pertussis vaccines,” he said.

Find out more about childhood vaccines from the U.S. Centers for Disease Control and Prevention.