The Poop on House Mice: They Carry 'Superbugs' 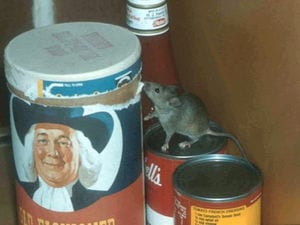 Researchers found that mice had taken up residence in all of the city neighborhoods they studied — from the wealthiest to the poorest. And some of the animals carried bacteria that cause gastrointestinal infections in humans — including salmonella, E. coli, Shigella and C. difficile.

When they dug deeper, the investigators found evidence of genes that can make the bacteria resistant to common antibiotics.

Does that mean house mice could be making some people sick?

It’s not clear how often that might happen, Lipkin said. In fact, there is little known about what kind of role house mice might play in transmitting infections.

“This is a difficult kind of study to do, logistically,” Lipkin said.

Getting permission to go into apartment buildings to collect any resident mice is tough, he explained. Plus, doing a genetic analysis of mouse droppings is expensive — and not glamorous.

While the study was done in New York City, there is no reason to believe mice in other cities would be substantially different, according to Lipkin.

“I’d expect to see similar results in other cities,” he said. “But we don’t have the evidence.”

The findings did not surprise Dr. Dimitri Drekonja, a member of the Infectious Diseases Society of America.

“It’s not terribly surprising that house mice would have these bacteria in and on them, when you consider where mice spend their time,” said Drekonja, who heads the infectious disease section for the Minneapolis VA Health Care System.

“And if you did the same analysis of house flies,” he added, “you’d probably see this, too.”

According to Drekonja, it boils down to a basic fact: Our world is covered in “a thin film of poop.”

So big-city apartment dwellers should not be alarmed by the findings, Drekonja said — nor should anyone with a seemingly mouse-free home be “smug” about it.

For the study, Lipkin’s team trapped over 400 house mice in apartment buildings in seven New York City neighborhoods, including wealthy and poor ones.

Overall, the researchers found that between 3 percent and 14 percent of the mice carried bacteria that cause human gastrointestinal infections, depending on the specific bug.

In addition, some of the samples harbored genes that confer resistance to common antibiotics used to treat bacterial infections.

In a separate analysis, Lipkin’s team found 36 different viruses in the mouse droppings, including six “new” viruses — none of which is known to infect humans.

Both reports were published online April 17 in the journal mBio.

Past research has shown that New York City rats also harbor bugs like E. coli and salmonella. But mice may be more of a concern, according to Lipkin, because they are in people’s kitchens.

“If I had mice in my apartment,” Lipkin said, “I’d take it seriously.”

People can reduce the chances of any bacterial transmission by regularly washing their hands and keeping kitchen surfaces clean, he suggested.

Lipkin also advised giving up any notions of a “five-second rule.” If your food lands on the floor — where mice may have recently scampered — don’t eat it, he said. (Adequately cooking your food will kill any bacteria, though, he noted.)

And remember, Lipkin said, that your home can still have mice even if you’ve never seen one. If you see droppings, or hear the sounds of scurrying in your walls, those are red flags.

Drekonja stressed the bigger picture. “We live in a world of microbes, many of which are beneficial,” he said. Some, of course, are not, and people can be exposed to them in numerous ways.

“House mice would be just one potential route of many. That’s why we should all wash our hands regularly,” Drekonja said.

The U.S. Centers for Disease Control and Prevention has more on diseases transmitted by rodents.