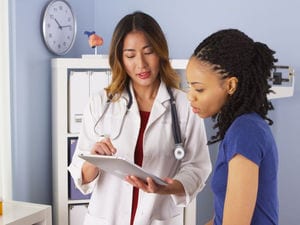 TUESDAY, Jan. 15, 2019 (HealthDay News) — About 4,000 women in the United States die from cervical cancer each year — even though there’s a preventive vaccine and screening to catch the disease early.

“When cervical cancer is found early, it is highly treatable,” said Dr. Sarah Ramirez, a family medicine physician with Penn State Health. “So it’s important to make sure you are being screened for this disease.”

The U.S. Preventive Services Task Force says all women aged 21 to 65 should have cervical cancer screening with cytology (Pap smear) every three years. Women between 30 and 65 may opt instead to lengthen the interval between screening with a combination of Pap smear and HPV testing every five years.

HPV (human papillomavirus) is the main cause of cervical cancer, but there is a vaccine to protect against HPV. Other risk factors for cervical cancer include smoking, autoimmune diseases, using birth control pills for five or more years, giving birth to three or more children and having several sexual partners.

“While we have made significant strides to decrease mortality from cervical cancer, we continue to see … minority females most commonly stricken with the disease,” Ramirez said in a Penn State news release.

“As the U.S. population becomes increasingly diverse, it behooves us to examine why there is a disparity in cervical cancer health with our vulnerable populations and why they’re not getting screened regularly,” she added.

Hispanic women get fewer Pap tests than white and black women, even though Hispanics have the highest incidence of cervical cancer, according to the American Cancer Society Cancer Action Network.

Also, black women have the highest rate of cervical cancer death, according to the U.S. Centers for Disease Control and Prevention.